This story appears in the
October 2009
issue of
Entrepreneur. Subscribe » 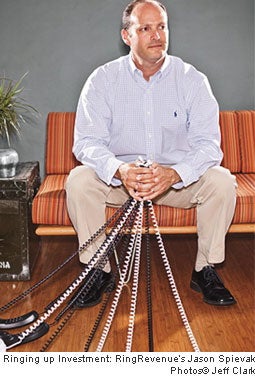 When RingRevenue co-founder, president and CEO Jason Spievak presented his company’s story at the Southern California investor forum VentureNet in September 2008, he wasn’t expecting much. Given the sluggish economy, Spievak was planning to hold off on seeking funding for his startup, which helps businesses track phone purchases consumers make after viewing online ads. He attended the event primarily to improve his pitch for use six months or a year later.

Surprisingly–even for Spievak–RingRevenue’s story garnered interest from VCs before the conference even officially got underway. That interest triggered a chain of events that led to the closing of a $3.5 million initial funding round for the Santa Barbara company in June 2009.

The reason RingRevenue’s new VCs decided to back the company had everything to do with the track record of the co-founders: Robert Duva, who is chief marketing officer, and chief information officer Colin Kelly. Both had served in similar roles at Spievak’s previous startup, the voice-over-Internet software and services firm CallWave, which had a $40 million IPO in 2004.

The round was led by GRP Partners, which was joined by Rincon Venture Partners and Great Pacific Capital. The latter two firms’ partners knew Spievak from CallWave.

GRP partner Mark Suster recalls seeing Spievak present at a warmup event held before VentureNet started. He liked what he heard, recalling RingRevenue as “the main, real business I saw there.” He felt RingRevenue solved a real advertiser need to better track how call-in purchases are generated. RingRevenue’s pitch–“We track calls like clicks”–persuaded him to come on board.

RingRevenue also had recently signed major affiliate-marketing firm Commission Junction. And RingRevenue had revenue–$10 million in sales is forecast for 2010.

“Part of our secret sauce is that we know how to cost-effectively acquire and manage large groups of phone numbers,” Spievak says. “We build platforms that allow affiliate networks to bring on higher-margin products like financial services, and track the calls that result from those ads. It’s a win for advertisers, affiliates and affiliate networks.”

The company was also running lean, which is always appealing to investors. “Here’s what I liked,” Suster says. “They were six engineers and a product manager and a CEO, and nothing else.”

For his part, Spievak thought Suster’s industry knowledge made GRP a good fit. “He went straight back to engineering and spent half an hour there,” Spievak recalls. “He truly understands our development process.”