The Voices of Venture Capital

This story appears in the
July 2010
issue of
Entrepreneur. Subscribe »

If your business plan is to start fast, grow big and sell or go public, then venture capital might be the way to fund that plan. In addition to an infusion of capital, you usually get access to the brain trust and contacts at the VC firm, providing experience and leverage for your fledgling enterprise.

The National Venture Capital Association says that 2010 got off to a rocky start, but VC investment was still up more than $1.3 billion over the first quarter of 2009. Still, that’s an 18 percent drop from the fourth quarter of 2009–which, overall, was a dismal year.

To help you navigate these ups and downs, we asked four early-stage VCs in various sectors to discuss what you need to know to get a leg up in the competitive VC marketplace.

How should entrepreneurs interpret fluctuations in the VC market?
Sabieri: In a way, 2009 didn’t have a chance to become its own year. The meltdown happened just a few months earlier. Everybody was trying to sort out all the problems of Wall Street and other areas and how that was going to affect us. When we came into the second half of 2009, some of those questions were answered. I’m not saying necessarily answers that we liked, but at least it was less of an unknown. We saw an increase in revenue, booking and volume in our businesses in the second half of 2009. We are optimistic for the rest of 2010.

Stolle: I would say that less money out there is good news for good entrepreneurs. There was too much money in venture capital, and that had negative consequences for everybody. When there’s too much money, you end up with 12 companies funded in a sector where there’s really only room for two or three. You don’t want a bunch of marginal companies funded because then there’s so little oxygen that nobody survives.

Peabody: I didn’t really see a change. There just aren’t that many venture capitalists interested in content-driven media. They don’t like how labor intensive it is to create it, so they gravitate more toward media technology instead of the type of companies I invest in.

Mendelson: From a historical standpoint, VCs have achieved tremendous returns investing in early-stage companies. There are a number of funds that have started up just for that purpose. You have the rise of the super-angel–individuals who are making 40, 50 or more investments out of a several-million-dollar pool of capital.

How does your firm find companies and make decisions about investing?

Stolle: It’s rare that an unsolicited business plan shows up on the doorstep and becomes funded. We have large networks of trusted colleagues and advisors, and we have more brought to us through those networks than we can handle or deal with. Even then, the ratio of what we fund is probably one in 20.

Peabody: We have close relationships with a group of funds that we know well and are predisposed to show us deals. About 50 percent of the deals we do come from one of the funds in our network referring them. The others come from being out there in the press and in the community, saying this is what I do. If you spend enough time on the website and you spend enough time Googling me and reading stuff I’ve written, you’ll know that I don’t invest in social media. But if you have a company that fits what I invest in, then contact me.

Mendelson: For us, the biggest source is referral from our inner network. That could be a former entrepreneur coming back with a new deal, which is a large source of deal flow. Entrepreneurs or executives of companies that we have invested in in the past may refer their friends and family. We also have a lot of deal flow from people contacting us cold. In several of our investments, we had no connection at all with the entrepreneurs.

What business elements make you say, “Wow,” or are immediate red flags?
Stolle: We put a lot of weight on the entrepreneur. What we look for is somebody who has real, deep knowledge and experience around the problem they’re trying to solve or the solution they’re trying to create. Starting a company is an irrational act, and building a company is an unnatural act, so it takes some real passion from that company builder to get through all the million things that are going to be in the way. Beyond passion, we ask, ‘Are there people who want to follow this entrepreneur?’ No entrepreneur ever built a company solo. You build it by building a great team and that team goes and wins.

Peabody: What I like to see is a site that is growing traffic consistently without spending money on marketing. Or, if they are spending money on marketing, they’re spending in a fashion that looks scalable and profitable. When I see a site that went from 5,000 uniques to 15,000 to 50,000 to 75,000 to 125,000 over a relatively short period of time, that gets my attention. It’s rare that I see a site that has six to 12 months of real, organic traffic growth. The company doesn’t have to be profitable, but its traffic needs to be growing in a way that seems to make economic sense. And I like to see that they’ve done work with the ad networks and understand how to manipulate them.

Sabieri: We are looking for people who have a particular solution that, when it gets applied to the market, will change the dynamic of the market or create a new market, providing people with a new opportunity to work, or play or live. We’re looking for people with vision, who are definitely experienced and credible in their fields. They have to have a complete understanding of what they want to build and how they’re going to build it. If entrepreneurs are too dismissive of what can go wrong, that’s not appealing. Because life is not just about everything going perfectly fine.

Mendelson: First is the idea. But the team is more important than the idea. Always has been, always will be. So you can have the cure for cancer but a crummy team, and it will fail. If you have a great team and kind of a medium idea, you can usually do OK. Because we invest in things, not sectors, we tend to be ahead of the curve, which is both helpful and harmful. Sometimes we are too ahead of curve and invest in something a little too early, but that’s a risk we take. 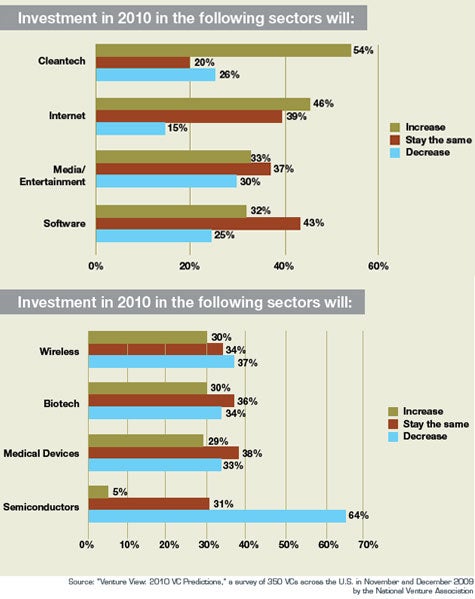 If I’m an entrepreneur seeking early-stage funding, how do I start the VC process?
Sabieri: Well, first, you have to determine if venture capital is the right source of capital for your business. A lot of people don’t quite take that step. There are companies that need to grow in a more organic way, or it may take a longer period of time to get to the next phase. And not every business needs to become a huge business that is sold or taken public, which is the goal of most venture capital investments.

Stolle: Get online and find firms that sound like they are interested in what you do. Look at the companies they’ve invested in and what the principals say in their writing. Then go talk to people in and around the space. This is where your lawyers and accountants can be helpful. It’s where other entrepreneurs can be helpful. Get opinions on what firms like this kind of thing. Let’s say it’s social gaming. Who’s doing deals in social gaming? And are they still investing? Because sometimes you kind of get over-invested, or at least you get fully invested in a category you don’t want to do anything else.

Mendelson: Once you find the early-stage firms online, read their websites. Look for those that show a real depth in their thinking. If there’s a connection, use it. Maybe you went to my college, we grew up in the same hometown, or you are a drummer, like I am. Whatever it is, find something that connects and use it. Then, you reach out with a personalized e-mail–not just cut-and-paste. Say that you’re looking for money, explain why you think we’re a good fit, show me you’ve read some of my blog or heard me speak. Then use the personal connection. That shows that you really did your homework.

Peabody: The best way is to go through your personal networks. People say they don’t know anybody. Yes, you do. You know someone. Your father or mother or your grandfather or your aunt or your uncle or your professor or somebody knows somebody. I don’t ever buy that in this world of vast social networks, you can’t figure out a way to get yourself to someone who will be able to get your plan in front of a venture capitalist.

What kinds of companies are you looking for now?
Peabody: Anybody who knows me knows that I’m really looking to invest in a food-and-wine site. I think the category is way underfunded. Beyond that, I’m pretty focused. I have a list of 15 verticals that I want to be in, and I’m sort of going down that list pretty methodically. Financial services and food and wine are at the top. I also think video is going to change dramatically the vertical publishing business. It’s something that’s going to be just one part of a broader health site or travel site or technology site for us, but it’s really important.

Stolle: In IT, the cloud is the next big platform shift. We’re moving to a world where computing is just like electricity. You plug a cable into the wall and as much juice as you need, as much computer power as you need, as much storage as you need–you know it’s all there. And you pay for it just like you pay for electricity, on a consumption basis. So what we’re looking for are things around the infrastructure of the cloud: the new hardware, the new infrastructure software, the new management software that’s required to operate the cloud and the general security for the cloud.

Mendelson: There are a lot of things that excite me. Obviously I have a soft spot in my heart for anything that is kind of techie, media and music. I get to spend a good part of my day talking to people who are in these spaces, and that is the best part of my job.

Gwen Moran is a freelance business writer based at the Jersey Shore and co-author of The Complete Idiot’s Guide to Business Plans.

The Easiest Way to Raise Money

The Bank in Your Backyard