Get in on a Burgeoning Market

This story appears in the
March 2010
issue of
Entrepreneur. Subscribe » 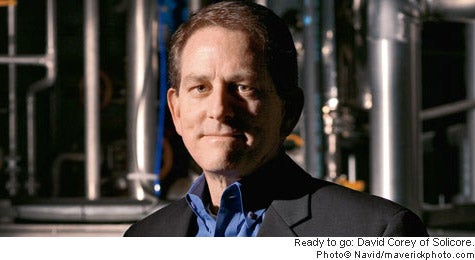 In a world where electronics and gadgets are getting smaller and more sophisticated, the batteries that power them need to shrink as well. That’s opened up a big market for
Solicore
, a Lakeland, Fla.,-based developer, manufacturer and supplier of ultrathin, flexible lithium polymer batteries under the Flexion brand. These skinny power sources can be used for everything from RFID tags to micro medical devices. However, the sweet spot the company has found are “smart” credit cards, such as Bank of America’s SafePass, which generates single-use passwords to protect against fraud.

It’s a market on the move. A 2008 report from research firm RNCOS estimated that the global shipment of smart cards surpassed 5 billion units in 2008, and that the number will grow by an average of 11 percent per year through 2012.

Solicore is in a strong position to service that market because it produces a battery the size of a postage stamp and half the thickness of a credit card that can withstand the high heat levels necessary to be embedded into such cards.

Nothing attracts investors like a unique provider in a burgeoning market. So, when Solicore CEO David Corey went in search of cash to power Solicore’s growth, he and his team attracted “a handful of suitors,” even in a tight capital market. The company decided to partner with the team headed by Rogers Corp., a technology manufacturing giant based in Rogers, Conn. The team, which also included previous investors Draper Fisher Jurvetson, Rho Ventures, Braemar Energy Ventures, OPG Ventures and Firelake Capital, invested $13.2 million in two Series D Preferred Stock financing rounds, one of which closed in July and the second in late November.

“We were introduced to Solicore through one of the venture company investors,” says Robert C. Daigle, senior vice president and chief technology officer for Rogers Corp., who joined Solicore’s board of directors during the first funding round. “We were impressed because they are the technology leader in their space in this emerging market area. Materials-enabled technology is really the core of Rogers’ business, so we saw Solicore as a great opportunity to potentially add growth in an area that fit quite well, strategically, with our company.”

Solicore is private about the annual revenue of its 35-employee organization, but even Corey–a veteran tech exec who has raised more than $200 million in capital during his career–was surprised at the final funding amount. “The joke that we have was that we were defying gravity,” he says. “There weren’t a lot of deals getting done, and the number of deals getting done typically is in the low single-digit millions.”

Although Solicore has varied market opportunities in RFID and medical devices, the money from this round is being directed to cultivate this ripe-for-the-picking smart card market, Corey says. “Part of the evolution of the market is scaling up productions so we’re laser focused on how do we ramp our production and work with Rogers Corp. to ensure that they also have the capability in order to scale into the hundreds of millions of units,” he says.

Get the Most Out of Life